Joined Sep 18, 2008
·
6,703 Posts
Good advice on the pads - I'd strongly suggest getting some temp' paint for the discs while you're at it so you know what temperatures you are working the brakes at and can get the best pad materials* for what the temperatures are - not much point getting some super high temperature ones if mid' range temp's are all you are reaching.

Just dropping the rear does virtually** nothing for weight distribution - you have to physically move mass in the car to do that - but it will reduce the roll a little.

*There are heaps of review sites on the interweb, this is one I found for a friend looking for pads - http://wiki.seloc.org/a/Brake_pads

**to clarify because I was wrong to use such an absolute term when it is only correct to do so when the centroid and centre of rotation co-incide.
► Show Full Signature
NOTE, these are my thoughts and opinions, sometimes I'm wrong ;-)
D

I disagree with your weight distribution statement. By lowering the rear does move the weight (think of the centre of the car as a pivot). by raising the front you are also moving weight towards the back of the car. I've spent many a hour corner weighting race cars. Obviously moving physical weight in the car about helps but often other a battery, extinguisher and fuel system thats often very limited so have to raise and lower certain coilovers to shift the weight around to achieve to 50\50 corner weight split with the driver in the seat and required fuel for the race. I have plenty of before and after examples, my corsa b was a perfect one, dropped the rear and raised the front gave well over 100kgs more over the back axle and transformed the handling.
G

Joined Sep 18, 2008
·
6,703 Posts
Nope, if you said 100g, not kg, I would conceed the point as the centre of rotation is unlikely to correspond directly with the centre of mass, but that is just plain BS.
Either you are misrepresenting the effect or your measuring, or equipement, is faulty.
Heck, to use your own example, lifting the front and dropping the rear merely pivots the mass distribution vertically around the centre of rotation and the nearer that is to the centre of mass (or centroid in this case) the less difference there will be. You can do practial confirmation of theis with a simple ruler - drill a hole through the middle, so it is evenly balanced however it is rotated - if you have the left higher than the right (from the side) the weight/mass balance is the same as when it is lower on the left than the right.

Re-reading, I would say you are confused with setting corner weights to alter the individual tyre loadings - if so, you would have seen no change, for the same ride height, in the left/right or front/rear balance. As i said, I shouldn't have said "nothing" but "virtually nothing" as there can be a few tenths or hundredths of a percent difference - even then, there are examples where the effect can be the opposite of that desired due to specific CoG and pivot geometries.
► Show Full Signature
NOTE, these are my thoughts and opinions, sometimes I'm wrong ;-)
D

My Astra race car, coil overs adjusted to get perfect 50/50 cross weights with me sat in it and fuel. 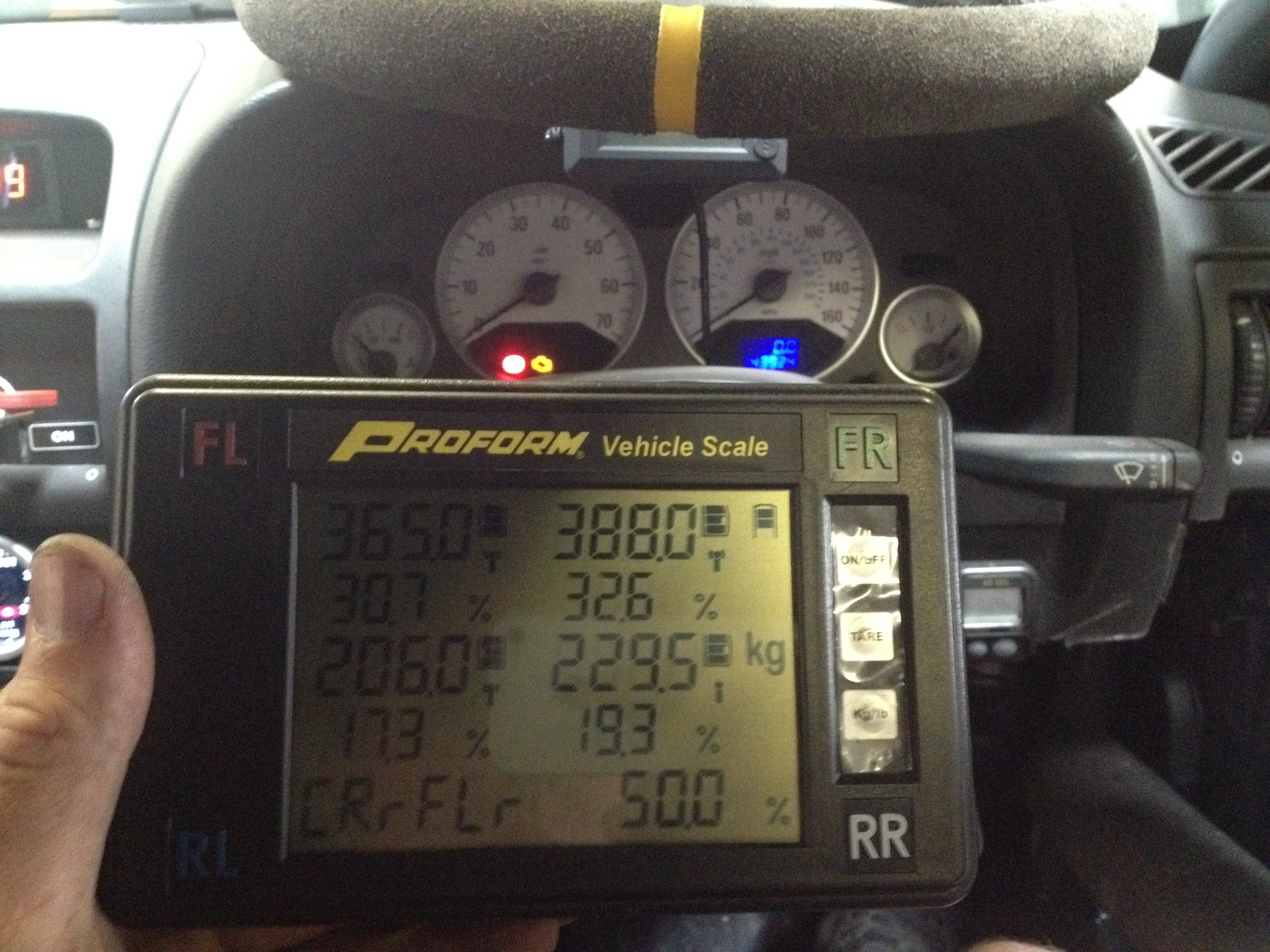 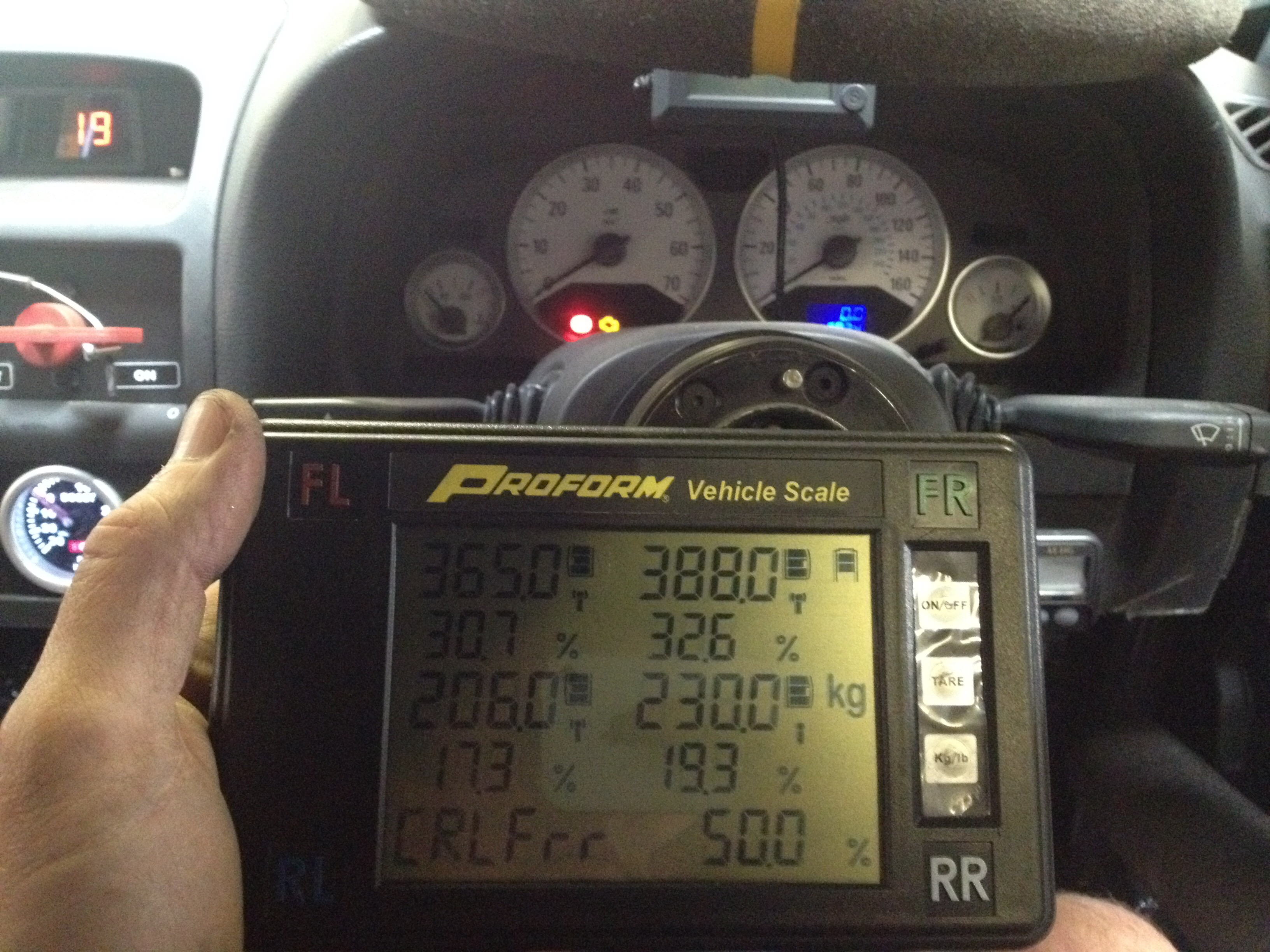 Joined Sep 18, 2008
·
6,703 Posts
You are just demonstrating my point - that you are confusing setting corner weights, AKA tyre loadings, AKA correcting wedge, AKA spring preload with changing mass distribution - or more accurately, the centre of mass as the same CoG, and hence tyre loadings, can be achieved with high or low polar distribution. It also looks like you posted at least one wrong image.

I repeat, look at the left-right balance before and after, then the fore-aft balance. You will see negligible difference.

Don't believe me if you like, just go and do some research yourself.
► Show Full Signature
NOTE, these are my thoughts and opinions, sometimes I'm wrong ;-)
D

Joined Nov 22, 2009
·
3,839 Posts
I cba with this conversation anymore, I have setup track and race cars for years with great results.

The pictures show the Rear right to front left and rear left to to front right and only one figure is different between the two and it’s 0.5kg and that’s just because I’ve moved when taking the photo as the cars still sat on the digital scales.

dewismotorsport said:
I cba with this conversation anymore, I have setup track and race cars for years with great results.

The pictures show the Rear right to front left and rear left to to front right and only one figure is different between the two and it’s 0.5kg and that’s just because I’ve moved when taking the photo as the cars still sat on the digital scales.

Agreed, CBA continuing as you evidently don't understand what you are doing by altering the spring seat positions. The disagreement ISN'T with your abilities to set corner weights (and definitely not any other aspect of prep' work), just an incorrect claim you made about moving the mass by altering ride height.
Heck, next time you have a vehicle on the plates with coilovers note the F-R and L-R balance, then wind one platform up and the other axle end down then look at the F-R and L-R balance - there will be no, or a negligible, change. Then, if you are still unconvinced, wind both up and then down and compare the F-R balance. Again, you will find no, or a negligible, change - that you are claiming the latter made a 100kg alteration is what I am calling BS on.

I queried the photographs as I would have expected your photographic "proof" to have shown two distinctly different images - one where there was wedge and one where the wedge was adjusted out by moving the position of the spring seat, which alters the spring pre-load in the setup position and therefor the tyre loads on the 'plates.
► Show Full Signature
NOTE, these are my thoughts and opinions, sometimes I'm wrong ;-)
J

Joined Dec 25, 2008
·
237 Posts
corner weight is something i dont know much about but something i will definitely look into. would have to see if i could get some cheap scales as i dont want to have to spend hundreds as its something i will probably only use once! would be interesting to see the final weight plus i will still have to fit battery and fire extinguisher so be good to know best place to mount them to get the weight in the right place. i know having my swirl pot and water meth will help add a few kgs to the back so hopefully thats a good thing.


i got the engine bay painted over the last few days. came out pretty good and happy with it as i dont do much spraying. also got my front strutbrace so drilled the holes and trial fitted it before bay got painted.

plan for today is to refit subframe, wishbones, hubs, brakes and coilovers then start fitting bits back into the engine bay and front wings, headlights etc.

next step then is to prep inside the shell and cage and spray the whole lot. hopefully by sunday i can start spraying again. need to refit steering column first actually as i have to weld on some mounts to bolt it onto the dash bar for roll cage and i have to weld on some plates for the harness eyes on the exhaust tunnel. annoying as weather is so cold this time of year so hard to get heat into the car as i only have a small gas heater but shed roof is sprayed with insulation so my shed does hold heat which helps.


Decided to fit the brembo calipers after. fitted the Bc racing coilovers along with RnD droplinks and blackseries powerflex wishbone bushes